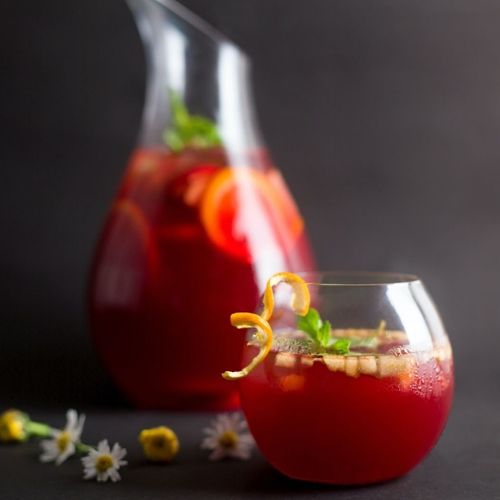 It’s National Sangria Day and what better way to celebrate than with a cold glass of sangria!

The wine-based drink has been around for over 2,000 years and has evolved as it has spread throughout the world. As Latin American and Caribbean cultures continued to blend from colonialism and into the modern era, sangria continued to reimagine itself and is still enjoyed today.

Follow us as we go on a journey of how sangria made its way from Europe to the Americas and beyond, and its relationship to the Afro-Latinx community.

We know sangria as a refreshing red or white wine punch we love to sip in the summer. Recipes around the world vary, but traditionally it was made in large quantities, using a red wine base with sugar and spices. This mixture was steeped for a few hours or several days. Over time, people began adding brandy, sparkling wine, and other sweetening agents like honey or orange juice, and serving it chilled.

Where in Spain did sangria originate? Is sangria Portuguese or Italian? These are common questions with muddled answers. It’s hard to pinpoint exactly where sangria came from, but we have a general idea of where its story begins.

Most of what people know about sangria comes from Spain and Portugal, but it actually dates back to the Middle Ages. Spiced wines were served after a meal as a digestif. These wines were called hippocras. Think of it like the grandmother of sangria. The name of the drink translates to “bleed” or “blood” in Spanish, referring to its deep red color.

In around 200 BCE, the Romans crossed the Iberian Peninsula to conquer Spain. In response to this, the Spaniards started growing grapes and making wine to have trade options. Wine was made out of necessity and not with the intention it is today, so adding fruit, spices, and sugar made it easier to get down. Soon after, it became the drink of choice for all ages. It was also safer to drink compared to water. Clean drinking water was scarce, and the alcohol in wine killed any harmful bacteria, reducing the chance of illness. Therefore, fermented beverages became the preferred choice for consumption.

Sangria gained immense popularity as it made its way to England and France in the mid-18th and 19th centuries. Instead of using Spanish wines like Tempranillo or Rioja, they began using French ones like Claret (the British term for “Bordeaux”). Cabaret Sauvignon, Merlot, and Cabernet Franc were also commonly used.

As colonialism spread, so did the drink. It eventually made its way to Latin America. From there, sangria landed in the U.S., making an appearance at the 1964 World’s Fair in New York City. The rest is history.

Path to the Caribbean and Latin America

Another form of sangria called sangaree is believed to have originated in the Caribbean by the British. As Spain, Portugal, and Britain colonized the Americas, they brought Madeira and port, which was the base of this version. Sugar, citrus, and at times rum was added, giving the wine a richer taste. It became a favored choice in Barbados and the Bahamas and soon spread to French and Spanish colonies.

Clerico, also known as “claret cup,” is Latin America’s version of sangria, influenced by British ex-pats who were said to have invented this drink in India in the mid-1800s. It has the same base as the one we’re most familiar with. People personalized it by adding various liqueurs like triple sec, club soda, and sugar. This is particularly popular in Argentina, Paraguay, and Uruguay, especially around Christmastime.

Mamajuana or Mama Juana is a lesser-known version of sangria, made primarily in the Dominican Republic, but it is found in Haiti as well. Jesus Rodriguez created it in the 1950s for medicinal purposes. Tree bark and herbs are macerated in red wine, rum, and honey, giving it a flavor similar to port. The health benefits found in Mamajuana are what sets it apart from the sangria we’re most familiar with. It’s used to cure the flu, clean the blood, kidneys, and liver, and improve circulation and digestion (and that’s just to name a few!), making it a universal remedy for almost anything. It’s also known to be a powerful aphrodisiac for sexual potency.

Why We Love It

Afro-Latinx people have taken something from a period of enslavement and forced relocation and made it their own. The versatility of sangria has allowed them to make this drink with limited resources, turning it into a symbol of togetherness. Whether sangria is used for treating a headache, or at a celebration, it’s best enjoyed with your favorite people.

Besides being delicious, sangria is inexpensive and easy to make.

It is one of those cocktails where you can bend the rules and make it your own, adding ingredients of your choosing. Start with a basic recipe, and the rest is up to you! To be considered sangria, all you need is a wine base with some type of sweetener.

Throw whatever you’d like in it to spice it up. Because you’ll be adding other ingredients to bump up the flavor, using the best quality wine isn’t necessary. This makes it a great option for parties and large gatherings. Any fruit will work, but citrus, melon, stone fruit, and orchard fruit are commonly added.

Today, sangria is enjoyed in a variety of ways.

Red Sangria: the traditional way to drink it with red wine

Mulled Wine: has a richer flavor than traditional sangria from its addition of baking spices. Is usually served warm in cooler months.

What to Pair With Sangria

Sangria is highly versatile, making it a perfect pairing for many different foods.

The refreshing, fruity flavor of red sangria is a perfect match for spicy foods and grilled meats. Sweet and heat are always a win!

Wine and cheese is a classic pairing that can be turned up a notch with sangria. For red, choose cheeses with bold flavors like Manchego or Asiago. For white, go with ones that are more mild, like Camembert or triple cream Brie. Seafood is another great option with white.

Make Your Own Sangria

Has all this talk about sangria made you thirsty? We’ve got the perfect recipe for you! Try these at your next brunch, summer picnic, or birthday party. 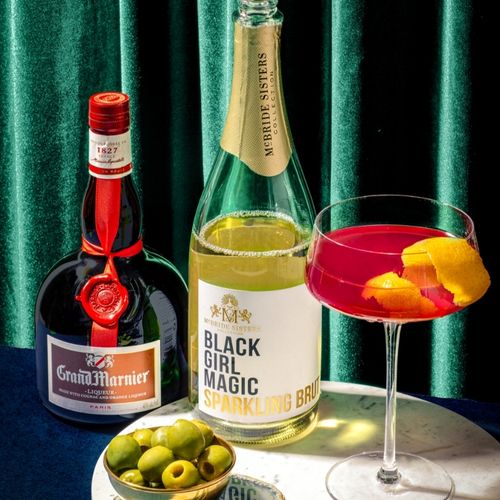 Combine all ingredients over ice in a wine glass. Stir, sip, enjoy!