Did you know in 2020, women accounted for nearly 41% of all gamers in the United States? [Forbes] Female gamers are on the rise and building authentically inclusive communities. Some of the incredibly passionate, nerdy women behind this charge are the founders of the*gameHERs!

They created a sexist-free space for the casual players, the hardcore gamers, the techies, the streamers, the designers, the cosplayers, the developers, and programmers. We’re raising a glass to these rulebreakers and game changers for Women’s History Month! Learn more about their mission to become a household name in the gaming community. 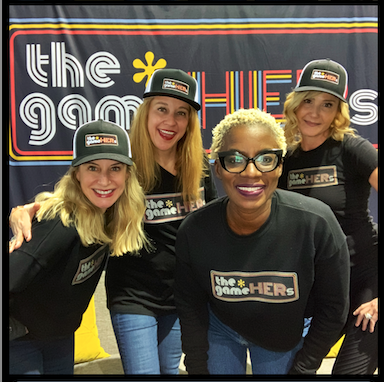 Tell us about your business and what inspired you to start:

It really hit home when two of our founders attended a conference about the future of the esports industry and they were among a handful of women in the room. A few cocktails and strategy sessions later, we decided that through a combination of our previous community-building experiences and an awareness of the need for representation in esports and gaming, our company was needed.

Since the*gameHERs officially launched in March of 2020, we have cultivated a thriving community that can be accessed in a variety of ways; from our social channels, our streaming content, our collegiate division, our annual Awards Show, and our very own app which launched in late 2021.

Who inspired you to break the rules or think beyond them as women in your industry?

Our inspiration to break the rules comes from so many places, starting with our mothers. We want to share the women that inspired our logo design because they were badasses & broke all the right rules.

The * in our logo honors Q*bert:

Doris Self: First Female and the World's Oldest Competitive Gamer. At the age of 58, Doris Self was one of the first female competitive gamers when she entered the 1983 Video Game Masters Tournament and broke the world high score record for Q*Bert with 1,112,300 points. Although her score was beaten a few years later, Self continued to work towards conquering Q*Bert. Self was featured in the documentary “The King of Kong: A Fistful of Quarters”, when Pac-Man world champion Billy Mitchell presented her with a Q*Bert arcade machine, spurring the then 79-year-old Self to start competing again. Tragically, in 2006, at the age of 81, Self passed away from injuries she received in a car accident. Although she is no longer in the game, her legacy will last in the annals of classic competitive gaming.

The yellow-redish lines in our logo honor the Vintage packaging in Centipede:

Determined to break into the game-making biz, Dona Bailey accepted a position as an engineer at Atari in 1980. Carol Shaw had already left for Activision, so Bailey was the only female game designer at the company. While there, she co-created and designed, along with Ed Logg, the classic arcade hit, Centipede. After its release to instant success, Bailey disappeared from the video game industry only to resurface 26 years later as a keynote speaker at the 2007 Women in Games Conference. Bailey revealed it was the pressure and criticism from her male counterparts that drove her from the business. Today, Bailey encourages women to pursue careers in games. She works as a college instructor teaching numerous courses, among them game design.

3 colors side-by-side honor the vintage packaging in River Raid and orange/yellow colors/font in PONG (from Atari 2600):

Computer programmer Carol Shaw is best known for her work at Activision with the retro hit River Raid, but years before, Shaw had already made a name for herself in the history of video games. In 1978, she was the first woman to program and design a video game, 3D Tic-Tac-Toe for the Atari 2600. In 1983, the final game that Shaw completely programmed and designed herself, Happy Trails, released just as the video game market crashed. With the industry in shambles, Shaw took a break from making games but returned in 1988 to oversee the production of River Raid II, her final swan song in the world of console gaming. Shaw and her husband Ralph Merkle, a specialist in the fields of cryptography and nanotechnology, are retired.

How does your sisterhood - friends, family, and colleagues - support you personally and professionally?

First and foremost we want to shout out and raise a SHE CAN to the amazing women that work at the*gameHERs. We are so grateful to have a diverse, strong team working at the*gameHERs … that also happens to be over 90% women. The respect, kindness, and support they show each other makes every meeting, Zoom call, and event so supportive and positive, it's really one of the best parts of building the business.

As a company, we are also so fortunate to have a trusted group of women on our advisory board who come from inside and outside the industry and provide guidance, feedback, and support.

Verta: My sisterhood is my best friend and business partner Naa, my daughter, Simone, my beautiful mother, Wannetta and my twin sister, Juanita. They are literally the village that makes it possible for me to be out in the world doing the things I love. They keep me laughing and they keep me honest and most importantly they believe in me.

What does women empowerment mean to you in 2022?

For us at the*gameHERs women empowerment means:

What goals would you like to achieve this year to advance yourself and your business?

This year we want to meet as many of our community members as possible. We want to grow and expand our community in the United States and globally. We want to become a household name because everyone is a gamer and/or has a gamer in their lives that they love. We want to be the go-to place for elevating, amplifying, and honoring women and all the*gameHERs in the world.

What’s your favorite SHE CAN flavor?

SHE CAN Island Citrus is a favorite because as Verta’s Caribbean family would often say ... “I was processed in the islands and manufactured in the states.”