A Tale of Two Hemispheres 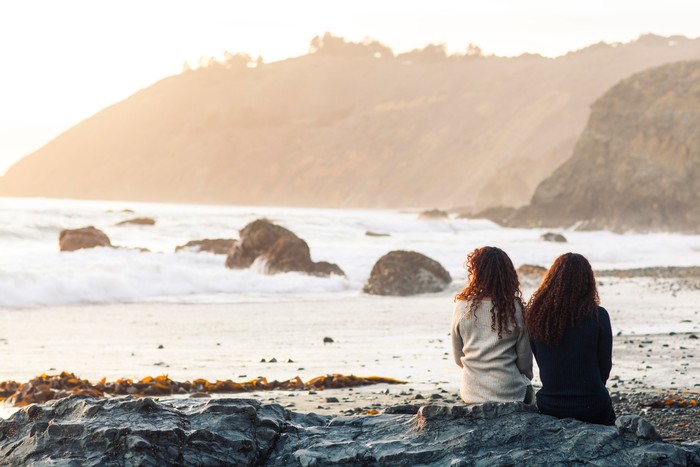 Fuzzy seasonal sweaters, hot cider by a warm fire, scarves, Christmas markets, and even snow playgrounds. Comforting festive visuals are what some of us know Christmas to be all about. For those of us who grew up in the Northern Hemisphere this warming visual may be spot on, however, for those residing in the Southern Hemisphere, a very different picture is likely to come to mind. So many of the Christmas traditions in the Northern Hemisphere revolve around the cold season, so a change in climate is sure to be reflected in the way the holidays are celebrated.

One of the things that make the McBride Sisters Collection unique is the story of how we came together as sisters from opposite sides of the world. With Andrea growing up in New Zealand, and Robin coming from Monterey, we were connected after years of not knowing the other existed following a family event that brought us together. As a result, both hemispheres are very important to us and hold a special place in our hearts.

The holiday season is a time for celebration. No matter where in the world you are located you’re bound to have certain traditions that you follow and take part in when the holidays come around. To celebrate diversity and unity of the two hemispheres, we have put together a guide highlighting how both the Northern and Southern Hemispheres celebrate the holidays in their own unique ways.

What Do The Decorations Look Like in Different Hemispheres?

Traditionally, certain countries that experience colder climates during the holiday season, such as America and Europe, tend to decorate grand trees with lavish ornaments typically in gold, white and red colors. These colors are associated with warmth during a season when most of the Northern Hemisphere wants to be rugged up somewhere cozy, escaping the harsh winter cold. In Japan, the customary Christmas tree is adorned with handcrafted decorations such as paper lanterns and origami, with the origami swan being one of the most popular Christmas ornaments.

In a majority of countries in the Southern Hemisphere, the holiday decorations typically reflect the traditions of their Northern Hemisphere counterparts, with large Christmas trees and opulent ornaments lining the trees. This could be because of the way in which Hollywood’s perception of an American Christmas has shaped many other countries worldwide. Australia and New Zealand are two countries who follow such traditions, albeit, occasionally with a twist. In either of these countries you might find decorations that reflect the island life, such as seashells, native plants and flowers, and more. New Zealanders actually have their own version of a “Christmas tree”, the Pōhutukawa, which is a native tree that grows vibrant red bauble-like flowers during the holiday season.

In many parts of South America it is common to find a nativity scene, or pesebre, accompanying the traditional Christmas tree, while in Mexico, piñatas decorations are filled with toys and candy to be a fun and interactive treat for the children.

Every individual country does have its own unique customs and traditions, however, there are some similarities that connect each region. Meals in the Northern Hemisphere winter months are typically based around hearty, warming dishes. In the United States, a holiday spread is likely to consist of a variety of roast meats, accompanied by gravy, stuffing, and lots of delicious sides, with hot apple pies and Christmas puddings following for dessert. In parts of Europe soups and stews are traditionally served to keep the winter chills away. In Poland, a homely soup called Bigos (“Hunters Stew”) is enjoyed around Christmas, while in Slovakia they serve one of their most celebrated dishes, a cabbage stew.

Holiday dishes in the Southern Hemisphere countries typically reflect the warmer climate, however, there can still be somewhat of a British influence seen in certain holiday spreads. In Australia and New Zealand, hot summer Christmas days are celebrated with spreads of fresh local seafood, salads, and often barbeques are cooked outside, typically accompanied by fresh fruit and a dessert called pavlova. In South Africa, it is also common to celebrate the holidays with a braai (barbeque), while in Argentina they serve their own version of pigs in a blanket, called niños envueltos, which is typically stuffed with cabbage and meat.

No matter where in the world you are, wine is a universal beverage that unites us all. At our Christmas table you’re bound to find bottles of our McBride Sisters Wine. For celebrations and holidays, we always like to have a bottle of McBride Sisters Collection NV Hawke's Bay Sparkling Brut Rosé readily available. Grown sustainably in Hawke’s Bay, New Zealand and enjoyed by us in California, we’re merging the two hemispheres with every sip! Check out our store locator to find a bottle of these bubbles near you for last minute shopping.

Our favorite holiday wines from our wine club? Reds of course. There is nothing cozier than a warm fire and a delicious bottle of red wine. This holiday season we'd recommend opening up a bottle of the McBride Sisters Collection Red Blend. The Red Blend will pair perfectly with your Northern Hemisphere holiday feast and it makes a delicious mulled wine using one of the recipes here or paired with your favorite pie.

Champagne and wine are festive staples in both hemispheres, with delicious wine-based recipes, such as mulled wine, being enjoyed in the colder climates. Other traditional holiday beverages served include cola de mono, a Chilean alternative to Eggnog that is served cold, while Italy’s own Eggnog alternative is the festive favorite Bombardino.

Festive activities in the Northern Hemisphere tend to revolve around winter sports, such as ice-skating, skiing, or snowboarding, or attending traditional Christmas markets where hot beverages and artisanal items are sold. Visiting tree lighting ceremonies and Christmas lights displays are other popular activities among those looking to be dazzled by impressive festive decorations.

Many Southern Hemisphere folk like to spend their time outside over Christmas, making the most of the hot weather and taking advantage of one of the Southern Hemisphere’s most frequented summer locations: the beach. Spending Christmas Day at the beach is a tradition for many, and you’re likely to find a majority of the popular beaches, such as Bondi Beach, packed with families, friends and tourists.